We’ve talked about doubt on a couple of past episodes, but we’ve saved one of the worst kinds of doubt: self-doubt—for its own episode.

Self-doubt is a sin.

Not sure you buy that? Well, stay with us…

Self-doubt can stem from different sources

1. Low Self-Esteem or an Underestimation of Your Abilities

The problem with this is that it often stems from Fear of being wrong, which puts this positive task God has given us into a negative light. That makes what we’re doing each day a task of fear rather than joy. We’re thinking, “Don’t screw up” instead of delighting in the work God has equipped us to do.

It points to a lack of trust that God can equip and enable you to do what He’s asked you to do. You doubt Him. That’s not just a bad idea. It’s a sin.

For example, I’ve (Erin) been working on an automation sequence for our newsletter, and I’m struggling learning how to use a new mailing program, and I’m doubting I’ll do it right. Pretty soon this whole process takes on an exaggerated proportion. Like it’ll be some HUGE failure if I mess this up. Well, no. The world will not end if my automation sequence has a glitch, or a mistake, or I have to redo it down the line. This is NOT a problem of epic proportions, but my self-doubt was making it into that. But look at what 1 Chronicles 28:20 (TLB) says:

“Then he continued, ‘Be strong and courageous and get to work. Don’t be frightened by the size of the task, for the Lord my God is with you; He will not forsake you. He will see to it that everything is finished correctly.'”

This type of self doubt is so dangerous because it doesn’t have any manners. It doesn’t just stay in one area of our lives. When we battle self-doubt as writers, it tends to spill over into every other aspect of who we are. So we struggle with feeling like we’re being a good enough spouse or parent or friend or Christian or whatever. And what better way to derail us from what God has asked us to do, whether in our writing or in other areas of our lives, than to whisper to us that we’re just not enough. And what we do isn’t enough.

Instead of resting in God and His leading, we start striving. We take on more than we should, we get frustrated and impatient, and we end up fulfilling the idea that we’re not good enough or doing enough because we become focused on self rather than on God. And that often leads into the next type of self-doubt, which is…

This one is a tricky one. It can be hard to identify because we don’t rationally think, “Hey, my problem is that I’m being self-sufficient.” But that’s what it comes down to.

When you doubt that you’re enough, you’re not really doubting yourself. If, indeed, God is the one who has asked you to write, or if He has led you to your spouse, if He is the one equipping you to parent or write or whatever, then when you doubt that you’re enough, you’re really doubting the supplier of your needs. You’re doubting God. And, like we said, that’s not just a bad idea, it’s sin.

3. Focus on what you’re doing right first, and rejoice.

Few things can derail us as quickly and effectively as doubt. And the most debilitating form of doubt is often self-doubt. But when we recognize that what we’re really doubting isn’t ourselves, but the One who gave us this task, who promised to equip us and prepare us for this task, who promises that He’s with us every step of the way, then we have to admit the hard truth that self-doubt isn’t just a bad idea, it’s sin. It’s doubting that God is who He says He is and doubting that He’ll fulfill His promises. The next time those doubts try to get to you, stop them in their tracks. Turn to God and submit them to Him. Let HIM take them down as He’s promised He will. And then move forward in the peace and freedom that God is in control. All you need to be is obedient.

What have you found to be your most effective cure for bouts of self-doubt?

Did you know that self-doubt is a sin? Come find out why—and how to be free from it! 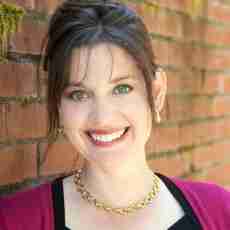 Waiting can be SO hard, especially if all you do is…well, wait. But you don’t have to let waiting wear you down. Guest Cara Grandle shares great ways to use your waiting time well.

Cara Grandle is a historical romance novelist who writes about the early settlers of the Pacific Northwest. Think trappers and loggers and scroungy-backed woodsmen. She is represented by Bob Hostetler and The Steve Laube Agency. Cara is the host of a podcast called Life Caraphrased and she leads the author4TheAuthor writers group on Facebook, home to 190 writers. Together they’re pressing back on busy and making a space for their dreams.

What the deep means to Cara…

For me right now, the deep as a writer pretty much has to do with this great waiting, and finding my balance inside of it. And finding my hope inside of it…And it’s not easy. It’s not for the faint of heart, this thing that we signed up for. It’s actually very hard.

For me the waiting is not just waiting. It’s the learning and the waiting well. It’s the figuring out who I am before the Lord as a writer, even when the industry hasn’t caught up to the fact that God has a plan for me.

Hope is a feeling. Hope is required in order to believe that you’re doing the thing the Lord has called you to do. What’s necessary for hope as a writer is to be able to picture your own success…That’s why Scripture says when hope is deferred the heart is sick, but when dreams come true at last it’s the tree of life.

Even if it doesn’t seem like…opportunities are lying out before you, don’t despise the season of building hope. It’s okay to dream. It’s okay to paint the future. It’s not ego. The Lord is good at balancing the inside of the human heart.

My validation comes from Him…and His plan for my life. Contracts and all those opportunities that I’m dreaming about are seasoning to the meal of my validation with Him. He is on time and ahead of time and fully preparing me for the best future for me.

What to do while waiting…

It’s important for me to remember that I don’t have to wait for these grand schemes to come together before I can move into the plan He has for me. It’s right now. It’s every day.

[It’s in] little acts of obedience. The Lord gives you little tiny assignments, and those will lead to a greater success in the long run than any kind of effort I scheme on my own.

It’s making sure you don’t lose your family in the name of your career. It’s making sure you don’t sabotage your sleep or your health in the name of your career. And it’s figuring out what your routine looks like and what you can sustain and maintain when the contracts do come in. It’s all of that kind of stuff. Those learning experiences take time.

Scripture for the long wait…

“Don’t give up. Don’t be impatient. Be intertwined as one with the Lord. Be brave, courageous, and never lose hope. Yes, keep waiting, for He will never disappoint you.” Psalm 27:14 The Passion Translation

My dreams and my expectations for what I think the Lord plans have been for me all through the years pale in comparison to what actually turns out. His provision for me, His supply for me, His plan and path for me as a writer will be more than my best imagination…He knows my best future.

Final words of wisdom about being in the waiting room…

Do not do it alone. Find your company…You’ve got to be around people who understand that you’re trying to do this whole writing thing on top of an already full and busy life. And it’s intense. What happens is that when you do go through hard times, the deep waters, someone else won’t be in the deep waters and they’ll be able to say things to you that bump you out so that your times that are struggles will be shorter.

Have you been, or are you now in a waiting time?
What tips can you share to use waiting time well?

Writers, are you in waiting mode? Don’t let that wear you down!