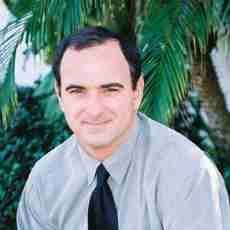 Author Mark Mynheir is a Marine. He’s been on a S.W.A.T. team. Done undercover narcotics work. And he’s been a law enforcement officer for almost 30 years. He’s a modern-day warrior—and he’s here to help you on your journey in the deep. Let his experiences and wisdom help prepare you for battles in the deep!

Mark Mynheir is a former Marine who’s worked in law enforcement nearly three decades. In his career, Mark has served as a patrol officer, an undercover narcotics agent, a S.W.A.T. team member, and a homicide detective. Mark has parlayed his police experiences into a successful speaking and writing career. He has written articles for Focus on the Family’s Breakaway magazine, Lookout magazine, and Christian Fiction Online and is also the author of five novels: Rolling Thunder, From the Belly of the Dragon, The Void, The Corruptible, and the Christy nominated The Night Watchman. Mark has also co-written two books with Max Lucado—Pocket Prayers for Dads and Pocket Prayers for Military Life.

What the deep means to Mark…

I was thinking about that, and it has so many meanings. Whenever I hear the deep, it’s the deep in my faith; where am I at with my faith. That’s what it really means when I hear the deep. I’m thinking “Where I am with Jesus?” Am I going deep, am I digging deep, or am I just skipping across the surface?

When I’m writing, when I hear the deep, am I getting deep with my characters? And it’s very similar to my faith; am I skipping across the surface, or am I getting down to the meat and bones, down into the soul. Like I said, the deep has a couple meanings, but as a writer, it’s really am I getting to the soul of whatever I’m looking at.

When I wrote my first book, a lot of it had to do with forgiveness. So, I’m writing this book and I have this little agenda in my head and I’m going along, but I didn’t realize until I was done, you have to dig deep in yourself… putting pieces of yourself in your writing. And I found after I finished my first book, there was a lot of myself in it and it was a lot of healing and cleansing that God was working in me. And I had this grand vision of who I was gonna help! If nobody else got anything from it, I did. God was able to work through some things in my life and my attitude. By the time I was done and really had reflected on it, I was really thankful.

Many folks know from an early age they want to write; they keep journals… That was not me. From a very early age, I struggled with written word. It was my enemy… I had learning disabilities… I hated writing.

I knew I could barely read and write, so I quit school at 17 and joined the Marines. I had a good service career… but in there I met a guy… he started explaining his learning disability and he said, “Mark, you have no idea what it’s like not being able to do what everyone else can do.” I was not a Christian at the time, but I knew God was speaking to my heart. And I looked at him and I said, “Yeah, I kinda do.”

So I get out of the service, I meet my wife… She encouraged me to go back to school. I went and I got tested and I found out I had dyslexia and dysgraphia. When they tested me, I tested grammar at about a second-grade level. Everything else was at a post-graduate level. It wasn’t that I was stupid, it was just there was a glitch somewhere in my head that really impacted me on reading and writing. Suddenly, it all made sense and my pain had a name… I had to take a year and a half of prep classes at college just to get into regular classes. My wife encouraged me so I kept writing. I went to school and kept learning and taking classes. And then I felt that…God called me to write and I just thought, “That’s just impossible” … I had these stories, but I thought I would never be able to put it onto paper. But again, my wife encouraged me… And finally I worked and I wrote my first book. I went to a writer’s conference… and a publisher expressed an interest in it. I was blown away, and I’m just thinking only God could do that.

I’d written novels…but I just didn’t have another novel in me… You hit that crossroad as a writer sometimes. About a week prior to this coming available, I said, “God… I wanna write something. But I’d like it where I don’t even get credit, I don’t care.”

A week later a former editor that I’d worked with at another publishing house emails me and says that Max Lucado has a series of books coming out. They’re pocket prayer books. One is for dads and one’s for military life. I had kids and I had been in the military, so I guess I was qualified. I’ve written fiction, I’ve written some articles…but never written a devotional. So what do you do? You pray.

Dealing with the darkness…

You can’t go through five, ten, fifteen, thirty years now… of law enforcement unscathed. It changes you. It really does. I spent my first five years of law enforcement…not as a Christian. I remember…becoming a believer and how the perspective changes, but the job changed you. You see so much horrible, horrible things. You…can become very jaded.

I don’t like going out in public. Whenever we go to a restaurant, my kids know which chair I have to sit in because I have to watch the door. I was talking about this with my co-workers the other day and none of us can be in a crowd for long periods of time. It’s very unsettling.

Police officers don’t do anything like normal people do… When you just wanna stop in and get a soda, you just don’t pull into a parking spot. You do at least one lap in any parking lot to make sure you’re not walking in on a robbery. You’re watching everybody’s hands. You don’t like people behind you in lines, especially when you’re in uniform, because you’re always a target.

We have an enemy, so I understand that and that helps me, but we also have a Savior.

I almost walked away from law enforcement and I was praying about it… “God, I don’t think I can do this anymore.” And God just made it abundantly clear… I read an article…that talked about the need for police officers and standing armies in a sinful and fallen world. That was just God’s clarification.

If God’s called you to write, don’t listen to the negative voices. Satan in your head. And please don’t read Amazon reviews. If God’s called you to write, you’ve got to write. You have no choice. Just do it, and God will do with it what He needs to do with it. You don’t worry about it, you only do what He calls you to do. Don’t let those negative voices derail you from what God’s calling you to do.

We Want to hear from you!

What does it mean to you to be a warrior in the deep?

How to be a warrior in the deep!