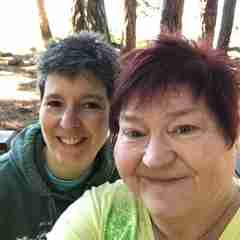 Today we want to talk about how we use words. In particular, a phrase that needs to die. Because it has implications that lead us away from God’s truth. We’re writers, so let’s make very sure our words are filled with truth.

Here’s something I’ve heard many times that can skew our perspective on God. Someone says…

Now, we get that what they mean is that they saw or felt the Spirit move, and that’s wonderful. But when we use a phrase like “God showed up” to express that event, we’re implying that God wasn’t seeing, hearing, or acting until they sang and prayed. But He was there all the time. No matter what we do, He’s there. Whether we feel Him move or not, He’s there. Seeing, hearing, and acting as He’s promised to do.

The simple fact is that God doesn’t “show up.” He’s already there. He’s omnipresent.

“Where can I go from your Spirit? Where can I flee from your presence? If I go up to the heavens, you are there;  if I make my bed in the depths, you are there. If I rise on the wings of the dawn, if I settle on the far side of the sea, even there your hand will guide me, your right hand will hold me fast.” Psalm 139:7-10 (NIV)

Clearly, God is working. He doesn’t step in or show up, He’s already there, walking alongside you. More often than not, He’s weaving His power and majesty into the everyday things we do to survive in the midst of the deep.

Consider the example of Paul and the shipwreck from Acts 27. Paul’s been arrested and he had to appeal to Caesar in order to keep from being handed over to the Jews who would take him back to Jerusalem to try him. The way to Rome from Caesarea (in Israel) is a long journey west from port to port across the Mediterranean Sea before they can go north to Italy and Rome. Landing, putting out to sea, landing, putting out to sea. And they’re hindered all the way by unfavorable winds.

Eventually it becomes too late in the season to sail safely, but they’re caught in a harbor unsuitable to winter in so they press on, only to get caught in a terrible storm. They’re driven and tossed, they have to pass ropes under the ship to hold it together, they don’t see the sun or stars for many days, they throw the cargo overboard to lighten the ship. They throw the tackle overboard. They take such a violent beating that no one even eats for 14 days, and they lose all hope of surviving.

But then Paul tells them to take courage because an angel of God told him everyone would be safe, but that they had to run aground somewhere. And that’s exactly what happens. They finally see land, they try to run the ship aground on the beach, but instead it gets stuck on a sandbar. “The bow stuck fast and would not move, and the stern was broken to pieces by the pounding of the surf.”

The soldiers want to kill all the prisoners so they don’t somehow escape, but the Roman centurion doesn’t let them because he wants to spare Paul’s life. The centurion orders those who can swim to jump off first, and here’s what Acts 27:44 says:

“The rest were to get there on planks or on other pieces of the ship. In this way everyone reached land safely.”

This is not flashy. It doesn’t appear miraculous. No one was levitated or instantly transported. If you wanted to, you could believe you just got lucky. You could believe that your own hand saved you.

But God tells Paul about it beforehand so they would all know it’s God.

Just another thought about that. Karen is a strong swimmer. She grew up in Oregon and spent a lot of time at the coast. She can tell you this: Good swimmers drown all the time in powerful waves. Rip tides, under current, etc. Regardless of how strong these men were, for everyone to survive, it had to be God fulfilling His promise.

Likewise, God is there, intimately involved in your life, keeping you afloat in the midst of the deep.

Whether He’s doing anything that looks flashy or not.

Whether you FEEL Him or not.

Maybe you’re writing your book everyday and it isn’t coming easily and you feel God isn’t with you, isn’t in it, but if God gave you this task, He is helping. He’s there.

We’re so primed to have “experiences” of God. Instead of to quietly trust.

Another problem with the phrase “God showed up” is that it gives us a skewed perspective on how God responds when we pray.

If God has to show up, then we have to wonder: Does He even hear? Does He see?

“The idols of the nations are silver and gold, made by human hands. They have mouths, but cannot speak, eyes, but cannot see. They have ears, but cannot hear, nor is there breath in their mouths. Those who make them will be like them, and so will all who trust in them.”

God, on the other hand, sees everything. And hears everything. We don’t want to say or do anything that could imply otherwise.

“Nothing in all creation is hidden from God’s sight. Everything is uncovered and laid bare before the eyes of Him to whom we must give account.” Hebrews 4:13 (NIV)

“For the eyes of the Lord are on the righteous and His ears are attentive to their prayer, but the face of the Lord is against those who do evil.” 1 Peter 3:12 (NIV)

Thank God that He does hear us, not only what we pray, but let’s go one better: He hears what we don’t even know how to pray.

“…the Spirit helps us in our weakness. For we do not know what to pray for as we ought, but the Spirit Himself intercedes for us with groanings too deep for words. And He who searches hearts knows what is the mind of the Spirit, because the Spirit intercedes for the saints according to the will of God.” Romans 8:26-27 (ESV)

The danger is in us not thinking He hears because we don’t see, feel, or hear an obvious or immediate answer.

Keys to How God Answers our Prayers

We can see this working in the book of Habakkuk.

“How long, O Lord, must I call for help? But you do not listen! Violence is everywhere! I cry, but you do not come to save. Must I forever see these evil deeds? Why must I watch all this misery? Wherever I look, I see destruction and violence. I am surrounded by people who love to argue and fight. The law has become paralyzed, and there is no justice in the courts. The wicked far outnumber the righteous, so that justice has become perverted.” Habakkuk 1:1-4

Like Habakkuk, we think God isn’t listening if He doesn’t answer us NOW! But what Habakkuk learned was that God not only listens, He’s already at work. He had His plans and purpose for Judah and Judah’s enemies.

“Look around at the nations; look and be amazed! For I am doing something in your own day, something you wouldn’t believe even if someone told you about it.” Habakkuk 1:5

God was already at work, and He was bringing the terrible nation of the Chaldeans to judge Judah. That was NOT exactly the answer Habakkuk was looking for! But it was God’s answer to accomplish HIS purposes in and through His own sinning people.

And yet, even in the face of the coming punishment, God did give Habakkuk some encouragement that those He was using to refine Judah would pay for their own evil as well.

So even in the hard truths from God that may come in answer to our prayers, He gives hope.

God doesn’t answer our prayers because we want Him to. He answers them to accomplish HIS purposes in our lives and the lives of others. And to bring glory to Himself. This is WHO He is – faithful, trustworthy, glorious. Answering prayer is one way He shows who He is.

We have a God who always sees, always hears, always knows our hearts, our thoughts. Before a word is on our tongue, God already knows it. He doesn’t need to show up. But He does use certain moments to let us see His grace, His presence, His work in a more experiential way.

Have you ever wondered if God hears your prayers? If He sees your situation? If He truly knows how you feel? What helped you in that situation?

Warning! You may not be saying what you think you are about God!

We’re grateful to our Patreon sponsor of the month, Tammy Partlow! Watch for her debut novel Blood Beneath the Pines, a suspense set in the deep South, releasing October, 2018!

Many thanks also to the folks at Podcast Production Services for their fabulous editing!