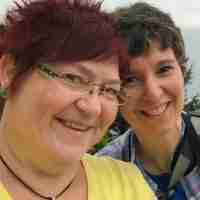 In a world seemingly without absolutes, Christians are being put on the spot more and more when they stand for God’s truth. How do we balance God’s command to love one another with the world’s accusation that we’re being hateful or intolerant? There’s only one way, and that’s to hold fast, in our lives and our writing, to the example Christ gave us of using His word to pierce the world’s lies.

In a world that values being politically correct, that is tolerant only of those who agree with its ideas, that counts not offending anyone as a badge of honor, Christians must walk a rocky path. Speaking the truth is labeled being “narrow-minded,” and, the worse sin possible: intolerant. But is that the way Jesus operated? The way the prophets operated?

Not by a long shot.

“We are not in a power struggle but in a truth struggle.” Marty Brown

The struggle for truth has been around since Adam and Eve. Just look at Genesis 3:1-5:

“…Did God really say you must not eat the fruit from any of the trees in the garden?” 2 “Of course we may eat fruit from the trees in the garden,” the woman replied. 3 “It’s only the fruit from the tree in the middle of the garden that we are not allowed to eat. God said, ‘You must not eat it or even touch it; if you do, you will die.’” 4 “You won’t die!” the serpent replied to the woman. 5 “God knows that your eyes will be opened as soon as you eat it, and you will be like God, knowing both good and evil.”

Jesus told them, “If God were your Father, you would love me, because I have come to you from God. I am not here on my own, but He sent me. Why can’t you understand what I am saying? It’s because you can’t even hear me! For you are the children of your father the devil, and you love to do the evil things he does. He was a murderer from the beginning. He has always hated the truth, because there is no truth in him. When he lies, it is consistent with his character; for he is a liar and the father of lies. (John 8:42-44)

If that isn’t offensive, I don’t know what is. Right before this Jesus basically called the crowd of Jews illegitimate children (including Pharisees, etc.)

Then there’s Jesus’ hearing with Pilate:

“…the reason I was born and came into the world is to testify to the truth. Everyone on the side of truth listens to me.” “What is truth?” said Pilate… (John 18:37-38)

Far to many people today respond as Pilate did:
“What is truth?“
“That’s your truth, not mine.”

But Jesus made it clear that there is no “my truth” or “your truth.” There is only Truth—God’s truth as revealed in Scripture. Look at John 17:17 “…Your word is truth.”

Still today, our culture is determined to undermine and redefine truth as relative instead of absolute. It’s nothing new. But our culture has caved on this.

Let’s take a minute to talk about the word of God. Look at Paul’s list of the armor of God in Ephesians 6:14-17: Belt of truth (that’s listed first!), breastplate of righteousness, shoes of peace, shield of faith, helmet of salvation, sword of the spirit—which is the Word of God. Truth again. Listed last like a bookend.

Not only are we wearing a belt of truth for defense, if you look, the sword of the spirit is the only offensive weapon.

Roman soldiers used the Gladius Pompeii. It was made for thrusting. A short sword 21-22 inches, that soldiers spent hours sharpening, honing, so they could be extremely precise with it in battle.

As the Roman soldiers, we are to be specific, precise with our use of the sword of the spirit, with Scriptural truths to counter satanic falsehoods.

Telling the Truth in What we Say and Write

The right way to speak the truth:

The right way to write the truth:

So how do we as writers share God’s truth—how do we take a stand for that truth—in our work?

First, know the truth, the Word of God, well. Read, memorize, study, apply it. As you do that, you need to be okay with the process, with searching, with waiting, with seeking the truth before you share it with the world. Know that there are layers in this journey, and keep digging until God shows you His core truth, and your core message.

One effective way to dig deeper is to ask questions, then to spend more time with God and His Word. Seek His answers. And as you do so, get ready, because this process often results in a paradigm shift. Be ready to experience some cognitive dissonance, when things don’t seem to make sense, as you let go of your perspective and gain God’s. Going through that, seeing for yourself that you can do that and come out okay…that’s what people want to know about. That they’re not alone. And they’ll survive.

Then, when you write, keep these things in mind:

In the face of a world so enamored of situational truth, we, as writers devoted to sharing God’s truth, have to know what we believe, why we believe it, and then step up to speak—and write—with boldness. With the sure conviction that when God says something is truth, it is. No matter what the world says about us or Him. Be offensive, as Christ was offensive. Not with the purpose of hurting others, but with the surety that only God’s truth will save people. In the long run, God’s not going to ask us if we were politically correct. If we sold a lot of books. If we wrote great stories. He’s going to ask us one bold, even offensive, question:

And then, “Who did you tell your readers I am?”

Let’s all seek His guidance and truth, that we may answer, whether in the spoken word or the written one, as boldly as Peter: “You are the Christ, the Son of the living God.”

Have you lost track of truth?