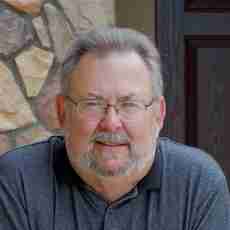 43 – Traveling in the Deep with Alton Gansky

Alton L. Gansky is the author of 24 novels, 5 novellas, 1 screenplay, and 11 nonfiction works, as well as principal writer of 9 novels and 2 nonfiction books. He has been a Christy Award finalist (A Ship Possessed) and an Angel Award winner (Terminal Justice) and recently received the ACFW award for best suspense/thriller for his work on Fallen Angel. He holds a BA and MA in biblical studies and was granted a Litt.D. He lives in central California with his wife.

He has hosted Writer’s Talk video podcast and is now cohost of Firsts in Fiction, a video podcast for up and coming writers—about the craft of fiction.

In addition to his own writing, Alton Gansky has consulted and provided editing/ writing services to several CBA publishers and written copy, video scripts, and other works for the general business market. Through Gansky Communications he has consulted with publishers and agents, as well as provided editing services. He is “the go to guy” for co-writing having been selected by Penguin, Waterbrook, Broadman Holman, and other publishers to work with their top tier authors.

Find out more about Alton at AltonGansky.com.

What the deep means to Al…

Well, I imagine it has many different meanings for many different people based on their travels through life. For me, the deep has been very positive, and at times been very negative. It’s been something endured rather than embraced. And other times you’re forced to embrace it, and you see at the end why. I’m getting old now so I’ve lived long enough to have many scars and to learn from them, and to pass them on to anyone who will listen. Not the scars, but what I’ve learned about the scars.

I think the deep is part of the travel. We walk through darkness at times. A lot of people don’t realize there’s places in Scripture where God is described as light, but there are places where it says God moves in the darkness. And that’s sometimes where you find Him doing His best work.

On learning from difficult places…

What I’ve learned over the years of my life and in my years in ministry is that we are not promised that rose garden. If we do get the rose garden we get the thorns also. Many Christians think erroneously that if they become a Christian everything is going to be fine and there’s never going to be any challenges. I used to teach my people, well, they crucified Jesus and He lived a perfect life, so there’s a good chance you’re probably going to face some problems of your own.

Difficulty is the course of life…What you have to do is accept it and lean into it. The other option is to just stop moving forward or, well, you can’t even back out of the problem. Sometimes there’s nothing you can do to get away from it. Your only positive choice is to accept that place and lean into the problem. Move on, keep going, and do whatever it is you can do.

Some of the most remarkable things we will ever see are found in the deepest caves…The Lord doesn’t necessarily provide us with all the light we want. I always want more light. But I’m not sure I could handle more light, if I’m being honest here. But He gives us enough light…and then if you use that light you see remarkable things. That’s part of life’s journey.

We’re going to fall down. It doesn’t matter if we trip and fall. What matters is if we get up. That’s the only thing that counts. Falling doesn’t count. Getting up does.

Satisfaction in the deep…

I’m not trying to sugarcoat this. I don’t want people to think this is fun… There’s nothing fun about it. But the satisfaction comes from having been faithful through it.

The first thing I do is quit. I encourage people to quit. The only proviso is you can’t stay quit. Quit as often as you want. But you can’t stay quit. Every once in a while it’s get up, walk out, I’m done. Career’s over. I’m going to find something else to do. And usually after a good night sleep I’m up and raring to go. And sometimes it takes a little longer.

I have my greatest satisfaction when I write. It’s also the toughest thing I do. Sometimes it’s hard to start and other times I’d rather go take a nap… as difficult as it is—and sometimes it’s like a root canal—I find even if I struggle through a difficult time, I will at the end of the day have greater satisfaction then if I did something else.

As a pastor, I was called to the hospital for a child that fell out of a moving car… I walked into the children’s hospital, looked into a couple rooms and then noticed all I did for the rest of the walk was look at the linoleum floor. And the reason was it hurt too much to look from side to side. When I saw the other children there…it just ripped me to shreds… I did my work as a pastor and then went to the car with my head down. A huge sense of shame washed over me. I remember thinking I wish I had the gift of healing…I would go from hospital to hospital, sneak in, do this work of healing, and sneak out. And that became the book By My Hands. I asked myself this “what if” question. That was the first “what if” question I ever asked in writing.

Out of my shame came a desire to one, be better at what I do, and two, to tell the story of what these things might look like. And that launched my career.

The great theologian Erma Bombeck said guilt is the gift that keeps on giving. I think that’s one of the things I’ve learned in my life. Guilt isn’t fun but you might as well learn something from it, otherwise you’ve wasted a good guilt. If you have to go through that…you might as well learn from it. Otherwise it’s a waste… You don’t know who you’re going to be able to help by doing that.

On writing from painful experiences…

That’s what writing is. We draw from our experiences…for example when I was a young pastor and I’d be called on to talk to people who lost parents and stuff like that, I always felt kind of removed. I didn’t know. Then my mother died. And I knew.

That pain made me a better pastor. Next time I was called out to help somebody who lost a loved one, I’d walked the path… I now understood… And sometimes when we write that’s what we’re doing. We’re teaching other people what it’s like to go through those things even though they may not go through them. But that very pain you have yourself, if you open yourself up to it—and trust me I don’t like it—it will translate onto the page. That’s where peoples lives are touched, putting that kind of real life into the fiction or even the nonfiction.

Go ahead and give up. You can quit all you want, you just can’t stay quit. And that is a normal thing. That sense “I need to quit” is really a moment to step back and reflect. Don’t be surprised by that. Every writer I know goes through that. Every honest writer I know goes through that…When you come back you’re fresher. Your subconscious has been able to work. So yeah, it’s okay to quit. You just can’t stay quit.

Have you ever did as Al suggested? Have you quit?
What happened as a result?

Immobilized in the deep? Alton Gansky talks about traveling the deep with wisdom and grace.

Thanks so much to our June sponsor of the month, Bobbi Updegraff! You can find out more about another important cause she sponsors at friendsofrenacer.com.